The Prologue: The Alternative Energy Megatrend in the Age of Great Power Competition 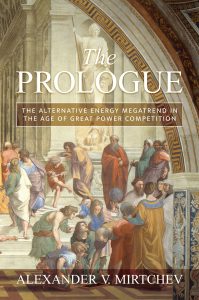 A comprehensive study of the geopolitical, security, economic, and environmental future of a major game-changing phenomenon—the alternative energy megatrend.

Why and how have contemporary alternative energy developments evolved into a 21st century global socio-political and techno-economic megatrend? What are the security implications of this megatrend? And what does the megatrend’s evolution reveal about upcoming geopolitical, energy, defense, environmental, and economic security challenges? This book endeavors to answer these questions by establishing the conceptual framework of a universally securitized world in which mutually interacting threats have expanded the needs and security considerations of today’s globalized and interdependent actors, including states, international organizations, multinational corporations, and political and social movements.

Notable praise and reviews for Dr. Mirtchev’s The Prologue: The Alternative Energy Megatrend in the Age of Great Power Competition:

“Alexander Mirtchev’s sweeping exploration of the changing energy landscape looks far into the future and outlines issues that will occupy scholars and policymakers for decades to come.”

“Dr. Alexander Mirtchev’s new book, THE PROLOGUE: The Alternative Energy Megatrend in the Age of Great Power Competition, provides a timely and truly inspired perspective on 21st century global security challenges. It has long been clear that security challenges of the 21st century are much broader and more holistic than they were in the last century when major power competition was largely defined by military power. Dr. Mirtchev’s book helps the reader unpack the complex relationship between economics, the alternative energy megatrend, security, and defense and the implications for the unfolding major power competition. Faced with this daunting complexity, Dr. Mirtchev urges policymakers to undertake the essential task of any successful strategist: to prioritize objectives to align ends with means and be smart. Fundamentally, THE PROLOGUE offers a valuable new framework for international strategic analysis and course of action.”

“With the advancements in alternative energy technology at the beginning of the 21st century, energy security thinking and planning will never be the same. Alexander Mirtchev’s profoundly original book THE PROLOGUE reveals the new dilemmas that will challenge policy makers in all major economies and provides for dealing with the new realities in a smart way.”

“Dr. Alexander Mirtchev has written an extraordinary book that is far ahead of any other contemporary analysis in connecting the cross currents of global security, international economic competition, and—above all—alternative energy. His PROLOGUE belongs in the hands of any serious policymaker and will undoubtedly be studied at the nation’s top universities and war colleges. A masterpiece of original thought!”

“Alexander Mirtchev’s work, THE PROLOGUE, is an impressive and comprehensive study of the geo-political, security, economic, and environmental impacts of the alternative energy trend. The accelerating development of alternative energy, as this book shows, is a geo-political, game-changing phenomenon. The new Grand Energy Game will have a greater influence on global affairs in the 21st century than ‘Star Wars’ did in the 20th.”

“The development of alternative energies is now sufficiently advanced, at least in terms of promise, to influence the “global security equation,” making the book THE PROLOGUE: The Alternative Energy Megatrend in the Age of Great Power Competition a timely one indeed.”

“Alexander Mirtchev’s book is an amazing study that has succeeded in breaking through the complexities of current alternative energy developments and strategies. Not only does it highlight the major policy challenges (energy independence, the environment, economic security, defense, nuclear proliferation), and geopolitical considerations, but it puts forward a pragmatic and smart methodology for addressing the planned, as well as the unintended and unforeseen.”

“The alternative energy megatrend, as described in Alexander Mirtchev’s book, occupies a large and growing role in the World Bank’s energy portfolio and policy advice. With the Bank’s focus on economic growth and sustainable development, his emphasis on the security dimensions of this issue is both interesting and relevant.”

“Alexander Mirtchev’s new book is an insightful strategic analysis of the security implications of modern global phenomena that provides for enhanced understanding of the rapidly transforming 21st century geopolitical environment as well as how to deal with its manifest challenges. Policymakers, as well as academia and the private sector, would benefit from taking on board its original thesis and bold ideas.”

“I found your book most stimulating. I look forward to seeing the reception.”

“Alexander Mirtchev has provided a thorough examination of a possible significant future, in which the implications of alternative energy source developments come to dominate national, economic, and environmental security and world geopolitics. The thesis in the book is one that needs to be understood by global policy makers, not least in China.”

“Alexander Mirtchev’s book, THE PROLOGUE, introduces a not just original but smart methodology that provides for a breakthrough study. By defining alternative energy development as a trend and analyzing its drivers, the book allows a balanced perspective on issues that have remained beyond the radar screen of economic policy and planning, as well as a new understanding of the upcoming challenges, making it an essential read for both policy makers and business leaders.”

“The ongoing revolution in the energy industry is a comparable discontinuity to what occurred when Internet was developed for communications. Not just energy’s business model will change but both geopolitics and the competitiveness of many markets will be redefined. Alexander Mirtchev’s work is a very accurate and absolutely a ‘must-read’ analysis of this transformation, which will impact everyone’s life.”

“This is a comprehensive book on an important development by a leading authority on these issues.”

Professor Matthew Kroenig
Professor of Government and Foreign Service, Georgetown University
Deputy Director of the Scowcroft Center for Strategy and Security, Atlantic Council
Author of Return of the Great Power Rivalry and The Logic of American Nuclear Strategy

Alexander Mirtchev, a respected member of the Washington foreign policy establishment and vice chairman of the Atlantic Council, in a new book based on a study he conducted for the Wilson Center, names this changed horizon for what it is: a megatrend.

See what The Prologue readers are saying:

Have you read The Prologue: The Alternative Energy Megatrend in the Age of Great Power Competition? Write a review today: