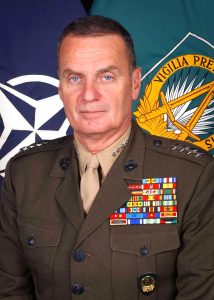 As the post-Cold War geopolitical and geo-economic frameworks buckle, Dr. Alexander Mirtchev’s new book, THE PROLOGUE: The Alternative Energy Megatrend in the Age of Great Power Competition, provides a timely and inspired perspective on 21st century global security challenges. Through the prism of the alternative energy megatrend, THE PROLOGUE analyzes the nexus of geopolitics, national security, and energy in the context of the new Great Power Rivalry and related Grand Energy Game.

The intersection of energy, geopolitics, and security is, of course, an age-old story. During my time as the Supreme Allied Commander Europe (SACEUR) from 2003–2007, I found myself wrestling with the implications of energy and geopolitics, as well as the proper role of a traditional defense alliance like NATO in addressing energy security. President Putin’s natural gas cutoffs on East Europe as a geopolitical tool had real implications for the security and resilience of our allies, but NATO itself had a limited mandate and limited tools to help allies in need. The threats posed by non-traditional actors concerned us as well, including the risk of a major terrorist attack on energy facilities.

During my time as national security advisor to President Obama in 2009–2010, framing energy security appropriately was one of my key priorities. During the transition between administrations, as we deliberated upon the ideal National Security Council (NSC) structure that would best serve the President, I sought to ensure that energy security had its proper place as a strategic issue in national security debates. It has been a life-long observation that the United States has never had a comprehensive energy strategy that takes into account the wider range of economic, security, and geopolitical factors that Dr. Mirtchev explores in THE PROLOGUE.

In the decade since my time in government concluded, the alternative energy megatrend has continued to develop, and the geopolitical and technological landscape has continued to evolve. In THE PROLOGUE, Mirtchev analyzes power dynamics of the current and upcoming geopolitical complexities, as well as the impacts on economic and environmental security. One of the book’s biggest draws is its exploration of where the alternative energy megatrend fits into the 21st century transformation of defense capabilities, doctrines, and policies in the context of today’s Great Power Rivalry. Nuclear energy also plays a role in the analysis — not as a green solution to environmental challenges — but as a potential road map for the future evolution of the megatrend.

To be clear, this is not another alternative energy study. Instead, Mirtchev posits that by diving into the complexities of the alternative energy megatrend one might glimpse the future, a future where universal securitization could “replace traditional defense with terms like the economy, health, the environment, or international law, making security an all-inclusive matter.” But, by his own admission, simply embracing universal securitization is not enough; it will overwhelm policymakers, leaving the system unworkable.

We may have already approached this threshold. The modern national security advisor and NSC structure struggles to integrate non-traditional security challenges and is overwhelmed by crisis management, leaving national security principals little bandwidth for the kind of strategic thinking or holistic assessments that a major power competition environment requires. One of the key conclusions in Dr. Mirtchev’s work is that dynamic prioritization is essential to any workable security framework.

In examining these complexities, THE PROLOGUE addresses some key questions: Why and how have contemporary alternative energy developments evolved into a global socio-political, techno-economic, and ideological megatrend? How is the transforming world of the early 21st century becoming universally securitized? What does the alternative energy megatrend reveal about modern and upcoming approaches toward energy security in the evolving Grand Energy Game? How does the alternative energy megatrend redefine environmental security and contribute to the greening of geopolitics? What is the future security trajectory of the alternative energy megatrend in the context of the Fourth Industrial Revolution and, in particular, the irreversible rise of Artificial Intelligence? Why does dynamic prioritization become imperative in a universally securitized world? What could be the shape and focus of the approaches, strategies, and policies necessary to benefit from the transforming 21st century security landscape?

Fundamentally, THE PROLOGUE: The Alternative Energy Megatrend in the Age of Great Power Competition offers a valuable new framework for international strategic analysis and a course of action. It challenges our preconceived notions about the alternative energy megatrend and what the megatrend tells us about 21st century security dynamics, as well as provides for innovative solutions for the unfolding new Great Power Competition.